By the time a mystifying Bradley Cooper utters his first line of dialogue as Stan Carlisle, several minutes into Guillermo del Toro’s lavishly configured take on “Nightmare Alley,” we’ve already seen the character drag a corpse and set a house on fire. A fugitive, not yet from the law but from his own unresolved resentment, the man lands at a 1930s traveling sideshow populated with curious acts of benign mentalism and bizarre cautionary tales.

Those first words said with hesitation are aimed towards the operation’s geek, an alcoholic man dehumanized for vicious entertainment, on the loose from his captor inside a disturbing attraction that warns visitors of damnation. What Stan can’t foresee from this point in the arc of his hasty rise to top-billing enchanter and thunderous downfall, is that he is in fact looking at a mirror.

That we can infer exactly where Stan's road leads isn’t just because of Edmund Goulding’s 1947 film adaptation or William Lindsay Gresham’s original novel. Even those unfamiliar with one or both materials can detect the cyclical parable del Toro establishes through his understanding and repurposing of noir tropes, both visual and thematic. His “Nightmare Alley” is a movie of psychological tunnels and downward spirals. In entering them, Stan risks getting lost and never coming out the other side.

Circular symbolism seems most explicit in the spins of an imposing Ferris wheel. Still more prominent in the aesthetic of Tamara Deverell’s impeccable production design, heavy on green and gold tones, is the disorienting depth of the world when Stan reaches Buffalo, New York: long corridors, spacious offices, and narrow streets that obey the movie's dramatic needs more than period precision.

Deverell's work stands inextricable in conversation with that of cinematographer Dan Laustsen, now on his fourth outing with the Mexican filmmaker, whose single-source lighting choices give the actors a timeless, glowing aura. There’s impeccably artistry, and then there are del Toro’s productions, on an almost peerless level of detail at least as it pertains to genre cinema. Del Toro’s signature monsters aren’t entirely missing from his new vision, as a pickled creature named Enoch, with a third eye, floats in a state between artifice and legend.

At the carnival, Stan becomes acquainted with a top-notch ensemble of eccentric figures. Among them, two of del Toro’s previous collaborators, played by Clifton Collins Jr. and Ron Perlman in small parts. But it is in odd couple Zeena (Toni Collette) and Pete (David Strathairn) that the “young buck” discovers a new calling. With a sophisticated word code, they can pretend to read minds and guess objects while blindfolded. Acquiring their powers over the average person’s incredulity becomes the deceitful antihero’s objective, as he also courts Molly (Rooney Mara), another carnie that falls for his effortless panache.

As one of Hollywood’s most consistently intriguing stars regarding his role choices, Cooper works magic with an unassumingly sensational turn that maps the trajectory of his Stan from dubious naiveté to deranged confidence and ultimately pitiful resignation. The goal here isn’t to emulate the air of a classic star, but to make these transitions believable enough to instill in us doubt about his degree of heartlessness.

There are more than just a few obvious modifications between the 1947 iteration and del Toro’s 21st century interpretation, namely the deepening of the characters’ motivations and existential vicissitudes. Stan’s daddy issues, for example, take on a larger relevance through Cooper’s embodiment of a boy in the body of a man still crying for validation, and raging against the world in a disguise of success to demand it.

Take as a proof an early scene in Zeena and Pete’s abode where the elder man showcases his tricks of manipulation. Stan, presenting himself as a bright-eye puppy of a man, falls for the demonstration that implies he had a difficult relationship with his father. For a moment he felt emotionally naked in the comfort of another’s recognition, only to discover that he’s just part of the common denominator. He was read like a book proving Pete’s point.

“People are desperate to be seen,” Pete exclaims. “People are desperate to tell you who they are.” Pithy but piercing, the truthfulness packed in that phrase is bone-chilling. He goes on to caution about the “spook shows,” playing with the fire of pretending that one has supernatural powers that can communicate with the hereafter. Naturally, that’s exactly what Stan goes on to pursue as he escapes the countryside for the big city with Molly.

It’s at his most accomplished that Stan’s unscrupulous route comes into contact with Dr. Ritter (Cate Blanchett), a psychologist with a disdain for those like him who swindle the gullible out of their cash. With delicious malevolence, Blanchett constructs a cunning femme fatale armed with intuitive people-reading skills and the information she harbors. The actress, a paragon of elegance, stands out for her knowingly devilish gestures and pointed interrogation that do away with her adversary’s facade. Never underestimate Blanchett’s uncanny ability to surpass her own golden standards.

The longer Lilith interacts with Stan, the more she goes for blood, repeatedly draining the handsome charlatan of his weak self-confidence with every session. Those tête-à-tête sequences with her and Cooper, in her opulent office, offer the film’s most riveting encounters, as the weaker link emerges from the switch in the power dynamic. As Stan gets drunk on the power he feels when convincing wealthy older men that he can communicate with the afterlife to atone their sins, the closer he gets to his impending fate prefaces by instances of gruesome violence.

Hypnotic with its increasingly tense slow-burning plot progression and alluring atmosphere, “Nightmare Alley” drags the viewer down with its self-destructive lead. Unchecked greed eventually dumps Stan into a circle of a hell of his own making, or perhaps, if one wants to embrace compassion, engendered by his predisposition to strive for more in order fill a void. Whatever the case, the film’s final shot, though deliberately foretold, resounds as a tremendous tragedy. 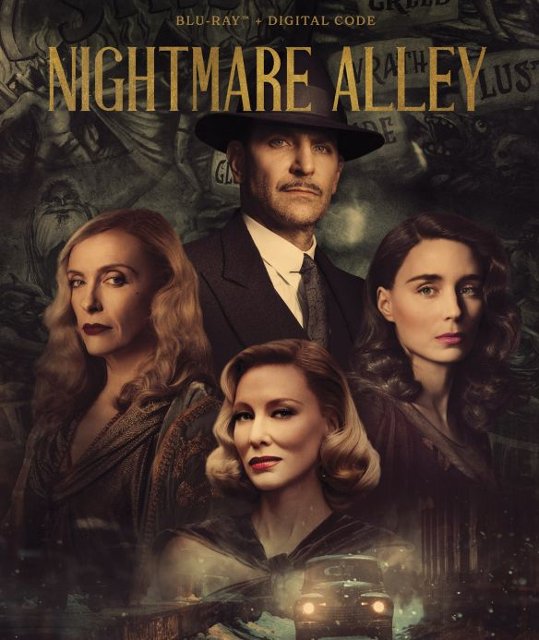