Festival Passes will be available on December 12th at 10am for our upcoming festival, running April 19-22, 2023. Passes will be reserved seating and may sell out for this year's festival, so book early!

These pass costs include  a $10 contribution to the restoration fund for the theatre.
*Student passes are only available at the Virginia Theatre. No online or phone sales will be made. Students must present a valid iCard at time of purchase and again when picking up Festival Pass(es).

Individual tickets may be available from April 1st.  We want to make sure that everyone who wants to attend the Festival – be it for one film or all of them. But, we may see limited availability this year, so reserve your seat early!

The Virginia Theatre has generously offered to maintain a waiting list for those who want to buy Festival Passes. In the event additional passes become available, those on the waiting list will be contacted by phone or email, according to the order in which they were added to the list (on a first-come, first-served basis). Those on the waiting list will be given the contact information for those unable to use the passes they purchased, and the re-sale of the pass(es) will be conducted directly between the seller and the buyer. Any resale of passes should be done at cost, i.e. no scalping or discounting.

How do I exchange my Festival Pass confirmation tickets for the actual pass?
Confirmation tickets must be exchanged for the actual passes – the ones you wear on a lanyard around your neck. Festival Passes will be available at the Virginia Theatre box office starting on Monday, April 17th, two days before the opening of the festival. Identification is required when picking up an Ebertfest pass. Accepted forms of ID include:

The box office is open Monday through Friday, 10 a.m.-5:00 p.m. and two hours before every show. Most people pick up their Festival Passes on Wednesday before the opening film.

If you want to see a film that is sold out, go to the Virginia Theatre Box Office 30 minutes before screening time and wait in the rush ticket line. Shortly before the film begins, any empty seats will be sold on a first-come, first-served basis. 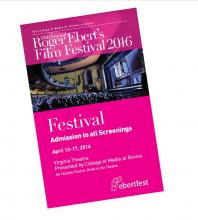